It is the hypothesis of Octozone that the American painter and illustrator Norman Rockwell was one of the main developers of the 'Octo Ring' code during the 1900's. His technique of deploying the code was later copied by Hollywood (especially Steven Spielberg) and other artists and it remains in use to this day. Below we analyise some of his work. This process is ongoing and new material will be added over time.

The circumstances in which Rockwell used and developed this code can only be speculated on. Was there an inter-dimensional aspect to it? i.e. An 'other-worldly' intervention from "realities" or "dimensions" that coexist separately alongside our own with a specific agenda? Or was he trying to express his inner feelings and desires? Was he 'black-mailed' for some reason and 'forced' into it? The simple answer is we will probably never know. But what we do know is that he used the code during the course of his entire career, so he was heavily invested in it.

However, one cannot draw any conclusions or inferences about Rockwell's sexual orientation as our research deals mainly with occult codes and not the analysis of said individual and his character per say. This may seem paradoxical but it must be noted that there has never been any evidence, allegations, or the like presented that Rockwell acted or behaved in any way that was improper. Our research should not be viewed as some sort of 'reckless smear' of Normal Rockwell's work but a rational logical analysis of pattern recognitions contained with his artwork and how they connect to other historical artists, contemporary films and so on. We are analysing lots of different artists' work and Rockwell is simply (an important) one of interest. But given the context in which the occult codes appear and how long he used them, we feel it is important to briefly highlight research that examines such issues.

'At first, Norman Rockwell and Richard Halpern don't seem like such a great match...Halpern you probably haven't met: Yale-educated Johns Hopkins Professor of English, Shakespeare Scholar, author of several books of literary criticism, and museum-goer who appreciates contemporary art. After spending years engaged in a close reading of the painter's work and life, he has arrived at some startling conclusions. Rockwell, says Halpern, painted a lot more than nostalgia-tinged innocence. Ignore the received wisdom about the painter and take a good long look at Rockwell's work. Yes, you'll see innocence, but you'll also see darkness, sexual perversity, voyeurism, desire, and sophisticated musing on masculinity and femininity, what Halpern calls "weirdness in the midst of the ordinary and commonplace."..'

Outside of this, perhaps another biographical work of possible note that touches on this subject is by the author Deborah Solomon (Art Critic and Art Historian). In her 493-page book on the life and work of Rockwell entitled “American Mirror,” she claims that Rockwell “demonstrated an intense need for emotional and physical closeness with men,” and that his 3 marriages and subsequent children was an effort to “control[] his homoerotic desires.” . Furthermore, she suggests that “[W]e are made to wonder whether Rockwell’s complicated interest in the depiction of preadolescent boys was shadowed by pedophilic impulses.”  Probably the biggest mistake the author has made is in her coupling of Homosexuality and Pedophilia in these observations.
http://us.macmillan.com/books/9780374711047

It is also worth noting that the film Director Steven Spielberg is a fanatical fan of Rockwell's work and has acquired many of his works over the years. Spielberg like Rockwell, was a prolific user of the 'Octo Ring' code within his films - which we have broken down in great detail and presented in this website. First explore Spielberg and his company and then take it from there.

So where did Rockwell draw inspiration from for his artwork and embedded codes? The answer is:

1) The American artist and illustrator J.C. Leyendecker, who Rockwell took great inspiration from.

Based on research and analysis to date, it is the hypothesis of OctoZone that perhaps J.C. Leyendecker (a known homosexual) created (used) a code for 'gay' signaling which was employed within his work and various media. However, it is additionally noted that Leyendecker also embedded 'Octo Ring' code/symbolism in other works. A selection of artworks from Leyendecker are presented below to demonstrate both sides of this. The reasons as to why or how this came about can only be speculated on at this time and needs extensive research.

It is recommend that you observe the artwork of Leyendecker first before viewing Rockwell's work. This will give you a good foundation and grounding to work from.

2) The Boy Scouts of America (BSA)

We know from research that Normal Rockwell was very closely associated with the Boy Scouts of America for over 40 years. He was behind a large percentage of their artwork and illustrations which established the BSA 'public image' during that time and beyond. Therefore, he would have had a broad knowledge of the Symbolism, Numerology, Chromatics and Words of the Boys Scouts of America, of which he incorporated into his artwork - For example: colour code, alpha-numeric, etc.

So, let's look at the artwork of Norman Rockwell. For anyone that is not familar with Rockwell’s paintings, he appeared to have a fascination with young boys as they featured in many of his artworks. When looking at Rockwell's work, there is a few techniques that he uses when embedding codes. You should be on the look-out for the following:

1) 'E 3' '3 E' codes are usually embedded in the Wrinkles, Folds and Creases of clothes.  When analysing his artwork for  'E 3' '3 E' codes, look at the clothing from every conceivable angle imaginable.

2) He normally places an extremely small figure of '8' somewhere within the artwork.

3) He uses the symbol of a dog a lot in paintings or illustrations which contain 'Octo-Ring' codes.

4) Codes can be hidden in hair, faces, and hands.

At first you might not get it, but with time and practice, you will begin to recognise the patterns. Rockwell's work is an extremely good way to train your eyes to spot 'Octo Ring' codes in either artwork, films, posters, etc. For example, examine this 'raw' image of Rockwell for several minutes. What codes can you spot?

Click on thumbnail below to view a large version of the above image with the codes highlighted.  How many did you spot correctly? 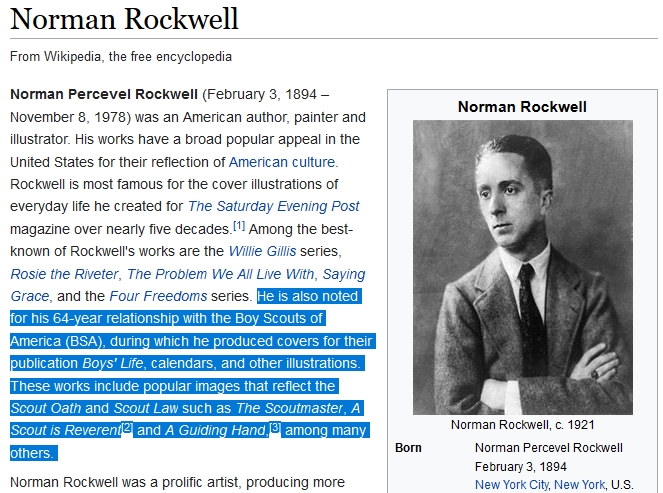